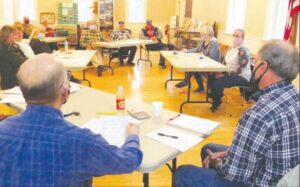 ERWIN TOWNSHIP — After meeting Tuesday evening for the first time in six months, members of the Gogebic County Chapter of the Michigan Townships Association voted in four new officers, including a brand new position. Wakefield Township Supervisor Mandy Lake, who had volunteered to head the meeting until new officers were elected, is the new chairperson. “She looks like she’s doing a fine job here,” said Erwin Township Supervisor Larry Grimsby, while nominating her. Marenisco Supervisor Bruce Mahler quickly supported the nomination with lots of laughter occurring throughout the process, especially when asked if anyone opposed. In the past, chapter members have kidded about how someone who leaves the room may be elected chairperson while gone.

In a change from the association’s previous three-officer format, members also voted to elect Grimsby to the new position as vice chairman. Watersmeet Supervisor Mike Rogers nominated him, and Bessemer Township Supervisor Jeff Randall seconded the motion. Grimsby, who suggested the new slot, and Lake agreed that it will be easier to share the responsibilities once held by John Cox, who retired as chairman and as Wakefield supervisor last fall.

Members, who normally rotate gatherings every two months in the county’s six townships, had not met since Oct. 27 last year because of COVID-19 concerns. Tuesday’s meeting was at the Erwin Township Hall.

In other news, Segalin — who also serves as MTA’s District 1 director — reported that Michigan is expected to receive $10.3 billion in funds from the American Rescue Plan Act of 2021, which is the $1.9 trillion stimulus bill that President Joe Biden recently signed in response to the continuing COVID-19 pandemic. Segalin said that payments for each township could occur by May 10, with a second round of payments expected in one year. She added that allotments for each township will be based on “relative population base” and a 75% calculation of township budgets as of Jan. 27, 2020. According to Segalin, the funds may be used for pandemic-related costs or losses – including concerns relating to small businesses and individual households – as well as for water, sewer and broadband. Funds also may be used to issue “premium pay” for essential workers. She emphasized that funds cannot be used for pension plans, millage cuts or roads, and said that more details will be forthcoming soon.

–Voted, as a chapter, to support Enbridge’s Line 5 fuel pipeline in Michigan, with additional support expected from individual townships. Rogers provided a copy of the letter of support that Watersmeet directed to Gov. Gretchen Whitmer on March 31.

–Received an update from Barry Bolich, manager of the Gogebic County Road Commission, who distributed a written report of this year’s road projects. He assured that the gravel program is back in place, with $300,000 expected to be spent on county gravel projects in 2021.

–Heard from Grimsby that the county’s 911 system is vulnerable to rising costs of maintenance. –Learned from Jorge Cruz, detective sergeant of the Gogebic County Sheriff’s Office, that only one staff member there has tested positive for COVID19, and most staff members are now vaccinated. He added that no inmates of the Gogebic County Jail have tested positive, and there are currently 21 inmates. In addition, Cruz said that the sheriff’s office has initiated a part-time program that officials believe will help in hiring the best possible full-time staff. Jorge said the office also is working to comply with new state legislative directives issued on April 1 in relation to arrest guidelines.